I was keen to see whether the (not so common) harbour seals were still present in the Dart estuary, and because I wanted to catch a ride on the tide I had to set off just after dawn. It was finger-numbing chilly and visibility for seal-spotting wasn’t great (and it was blinking early) :

I heard the snort of a seal behind me but could see nothing but murk. As the sun rose the mist slowly thinned and the birdsong started to kick in. Loudest was the explosive short sequence of a Cetti’s warbler, which have only spread across the UK in the last twenty years or so.

After a couple of hours the sun eventually broke through and I slid across the glassy surface as I approached Dittisham and the most scenic part of the estuary. The narrower estuary makes the water a bit more active as the tide squeezes through, so this is a popular place for seals. Incidentally, the appalling creaking noise during this video is my drysuit as I pan the camera….apologies. I know it doesn’t really enhance the tranquility.

A seal popped up and I was very pleased to see it had the dished face of a Harbour (alias Common) seal. I just managed to get a snap before it disappeared for good. Harbour seals don’t seem to be as inquisitive as the usual Grey seals around here.

I felt I had to ‘do’ the touristy side of Dartmouth as I waited for the tide to turn. From the kayak seat, of course.

The ten mile paddle back was peaceful and uneventful. For the last couple of miles I just about kept pace with a bull Grey seal who was clearly on a mission to get to the head of the estuary for high tide. Perhaps it had a penchant for Grey Mullet. I was paddling at fast cruising speed (4mph) and the seal came up for a breath every three minutes (or so) a hundred yards in front of me. It certainly covered the ground (water).

This is a good comparison pic of the Grey seal compared to the Harbour Seal. The Grey is much bigger ( so looks chunkier) and has that Roman nose which is more or less a straight line from its forehead to its nostrils. And the clincher is that those nostrils are almost vertical compared to the harbour seals whose air intakes are at 45 degrees.

One more pic of today….. a swan with a couple of admirers.

An extraordinarily sunny and warm handful of days encouraged family Kirkwood out onto the water in a motley flotilla consisting of every kayak, and piece of kayaking equipment I could find lying about the place. Two Gumotex inflatables (single and double), a Perception Gemini double, and my Cobra expedition. Not quite enough PFDs (lifejackets) to go round, unfortunately.

We were joined by Dave and Sally and Tim’s girlfriend Jess.

Henry spotted the first item of wildlife interest. It was ‘only’ a brown rat, and gave us all the creeps, but an exceptional sighting because I think it is the only one I have ever seen from my kayak in SW England. I have actually see more whales than rats. Good eyeball, Hezzer.

Incredibly the open sea was even more smooth than the water of the estuary, and Dave and Sally were waiting for us on a perfectly selected private beach on which we could take lunch (dodgy sandwiches and half-melted mini eggs).

After troughing we paddled the open coast and Henry spotted the next wildlife nugget, a Mallard duck and her (very) newly hatched brood of twelve or thirteen (!) ducklings. Another exceptional observation as it extremely unusual to see a family of these ducks swimming along the open coast.

Tea break at Lantic Bay was followed by a paddle back which was about as relaxed as coastal kayaking can be, thanks to the millpond smooth sea and toasting sunshine.

The following day was equally as flat so I ventured offshore, solo, to see what was about. The sea was fairly quiet and the only cetacean was a single porpoise which I heard puffing and glimpsed surfacing at distance. Another one I heard I failed to see.

Probably my best sighting was this ‘bridled’ Guillemot.

A couple of its more conventionally marked friends were nearby, and looking very smart in the Spring sunshine.

The one on the right is in full breeding plumage, the other is still is in the changing room and  sporting a bit of its winter outfit.

Below the surface there were still quite a lot of Barrel Jellyfish about, pulsating mysteriously through the water, which was heavily speckled with plankton. 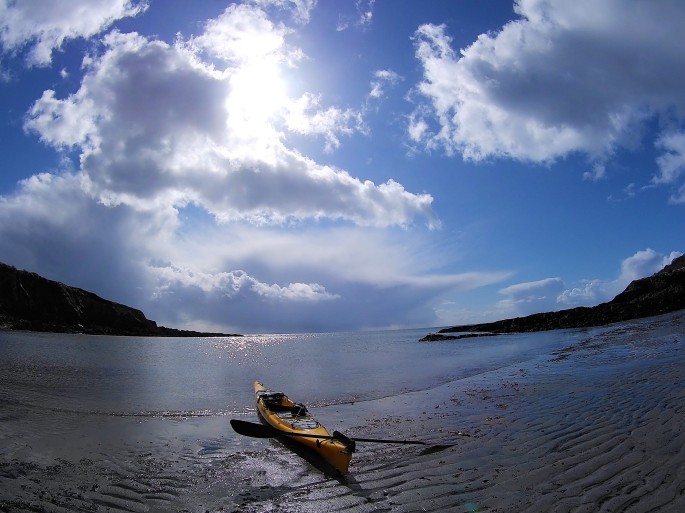 Here’s a selection of assorted pics from trips during the fantastic weather of the last ten days:

Don’t try to tell me that SW England is not a world class sort of place.