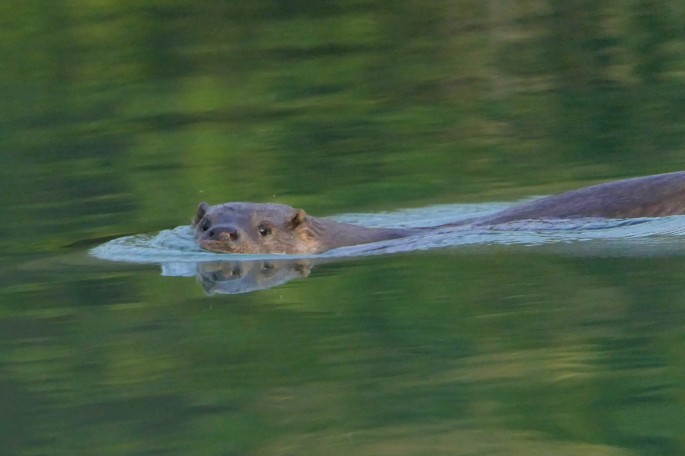 A sparkling, still, clear morning lured me down to the River Camel for a predawn start. It had to be that early so I could get up to Wadebridge for the turn of the tide, and although my kayak was encrusted in frost I was hopeful, as usual, to have some special wildlife encounters as the sun peeped up.

The beach at Rock was deserted apart from a few slavering mongrels dashing about with their owners frantically blowing whistles and the dogs taking absolutely no notice at all. 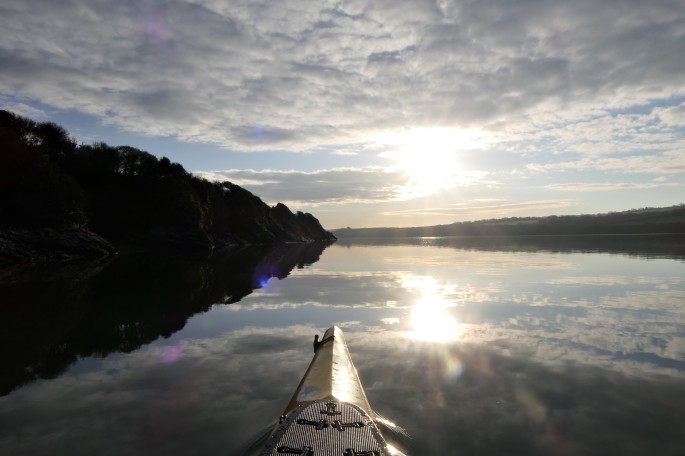 It was superb to head off up the estuary with my kayak silently knifing across the glass-calm surface.

The soundtrack to my trip was classic winter wetland birds: the rippling call of Curlew, piping of Oystercatchers, clear call of Redshank and a handful of Greenshank, and mewing of Lapwing.

I kept away from the shore to avoid disturbing the roosting flock of over a hundred oystercatchers at the foot of Cant Hill, and as I approached Cant Cove saw a disturbance on the completely smooth water a hundred yards ahead that didn’t look like a duck.

I engaged ‘stealth mode’ and paddled on in absolute silence and soon realised the ‘v’ on the surface was caused by an otter. It was heading straight towards me so I readied my camera and sat absolutely still. It dived a couple of times but continued on its collision course before glancing off at the last second, passing without apparently being too alarmed by my presence (or smell). Actually it seemed most concerned about the noise my camera made as the ‘burst mode’ clattered away.

A fantastic view in the post-dawn sun, smooth water and nice green backdrop to the image from the reflection of the trees behind.

I followed it along the shore as it continued to hunt, leaving a tell-tale trail of bubbles every time it dived. One dive was long and it covered a surprisingly long distance underwater,  before getting out into a mini cave for a bit of a sniff around. I was expecting another good view when it took to the water again but it inexplicably completely  disappeared even though there was apparently very few places for it to hide along the open shore.

This is only the third time I have seen an otter in salt water from my kayak in an open estuarine location around SW England. I saw one close to this same spot on the Camel last year, and one on the Fowey estuary many years ago. All the rest have been in the rivers.

There was a lot of waterbird action around the Amble Marshes a bit further upstream and the wind remained non-existent to make the paddling experience as good as it could be on a chilly winter morning. The sun ensured all the birds were looking at their best.

As I quietly slipped along I heard the plinking of a load of pebbles being flipped over along the shoreline and came upon a busy little gang of Turnstones doing just what their name suggests they ought to do. Interestingly I noticed that they flip the stones over by opening their beaks to act like a lever.

The best sighting was a pair of Whooper Swans far off across the saltmarsh but the supporting cast wasn’t to be sneezed at:

After sticking the nose of my kayak beneath the A39 flyover, I sped back down to Padstow on the outgoing tide and my morning of excellent wildlife watching was nicely rounded off by a thumping great Glaucous Gull, a rare winter visitor from the arctic, taking a rest on the sandbar in the middle of the river.

I arrived back at Rock and just about escaped from the car park before I was hemmed in by a convoy of shiny 4x4s with personal numberplates.