For a change of scenery I booked a sea kayaking trip to Greenland with Hezzer. This is the sort of thing I do in winter during the dark days and lousy weather. The darker it is and colder and wetter it is the more daft a project I dream up to do in the summer. And this year with a bit of pain from a replacement knee thrown into the mix, the resulting expedition was particularly extreme.

When summer eventually comes around I am usually quite happy  paddling the coast of Devon and Cornwall ,but Greenland was already booked ,so off we went.

We stopped over in Iceland which was disappointing because I hadn’t planned it properly. We stayed in a bed and breakfast near the airport which was a bit of a bleak lava field. We took one trip into Reykjavik to meet up with my brother Tim and Calum who were on their way to Greenland to hunt Musk Ox and fish. This was not a coincidence and I had timed our trip to coincide with theirs but all we did was have a meal together and share the plane from Iceland to Narsarsuaq in Greenland. Apart from that we saw nothing of the rest of the island.

The flight to Greenland was absolutely thrilling, and something I will never forget. The brown mountainous coast filled the horizon, with glaciers flowing down the valleys to break up into myriads of icebergs, and the great white sheet of the polar icecap covering the entire interior like a monumental duvet.

The little plane twisted and turned down the valleys below the level of the surrounding peaks to ‘give us a bit of a thrill’ as the pilot explained when he emerged from his cockpit afterwards.

As we disembarked at the tiny airport icebergs of all shapes and sizes bobbed about in the adjacent sea.

Hezzer and I were quickly introduced to our other five Tasermiut ( the travel company) expedition teammates and we were whisked off down the fjord in a RIB. Another thrill. Upon arrival at Narsaq we were introduced to Adrian, our guide and installed in the kayak ‘hotel’ which was a sort of shed but perfectly well equipped.

The next morning we had a brief wander round the Inuit town with its brightly coloured houses (and no fences)  before we were whisked off in another RIB to where the kayaks were located. Basically a beach in the middle of nowhere with seven kayaks stacked up neatly on the shore. Superb. Proper wilderness.

As we munched lunch prior to departure eagle-eyes Hezzer spotted a White-tailed Eagle circling about, which attracted the attention of a large falcon which carved across the sky towards it. I was pretty sure this was a Gyr Falcon as it looked too grey for a peregrine, but didn’t look too hard as I was sure we would see more over the next week, but we didn’t. Not for certain, anyway.

We loaded up our kayaks and off we paddled. Dodging between the icebergs which were constantly creaking and groaning and surprisingly often rolling over with a massive roar.Wise to give them a wide berth.

The camp on the first night was a superb location on the corner of a fjord and the water was complete glass. And the sun shone, just what I wanted. And yes it was cold at night but not below freezing.

More flat fjord, sun, icebergs and treeless mountainside the next day with a camp below the icecap on a desert like area. Really very little wildlife apart from the occasional wheatear and family of snow buntings, with eagles overhead every so often.

We had a superb paddle on day three past some massive cliffs and then culminating in the approach to the foot of a glacier with bergs breaking off regularly and thundering into the sea. Our camp overlooked the mile-long wall, but if you turned your head to look at the action when you heard the boom of breaking ice, you were generally too late because the sound had taken three seconds to reach your lugholes.

The next day we paddled beneath the two ‘feet’ off the glacier (at a respectful distance) . This was everything I had hoped for when I booked to come here. A wall of ice, glass calm blue sea and unbroken blue sky above. Perfection. When  arrangements were made for the walk up the glacier I declined to go as I was a bit worried about my new knee so just sat around watching the scenery. There was absolutely no wildlife to look at and not a sound of any life, just the crack and creak and crunch and grumble and thunder of moving ice.

Due to a sudden unexpected wind, which I think was a katabatic wind pouring off the ice sheet ,we had to be ‘extracted’ by boat and taken to an encampment of Tasermiut-owned plastic igloos for the night. I would have sooner been in the tent but never mind. Plastic igloos don’t really tick my wilderness box.

Next day was a short hop to an island where we went for a water collecting stroll , punctuated by a swim in a lake as it was so blooming hot! would you believe that…too hot in Greenland!

Our final day had us hopping across the mouths of several fjords so I was hopeful of my long awaited encounter with a whale from a kayak. Alas no whales but we did see a couple of seals but these were extremely easily spooked and no doubt with good reason as I think they are a prime hunting target for the local inuits.

Incidentally, if I had known I was going to have a spectacularly good and prolonged encounter with a whale less than a month later off the coast of Devon I may not have booked the trip at all.

We did manage a very distant view of a single Caribou at the range of about a mile, and that was the end of our six day Greenland kayak adventure. We covered just over fifty miles in total so I was reasonably happy with that. There were plenty of stops for ‘snacks’, in fact many more than I usually have (both in terms of the stops and the snacks) on my usual full day paddle trips.

A final night in the hostel and meal in the surprisingly well supplied Narsaq Hotel, and the next day we were speeding back up the fjord towards the airport with laughing Captain Oju cracking  (incessant) jokes at the helm of the RIB.

Greenland did turn out to be a place of extremes. The world’s biggest island  and the least densely-populated country in the world. Two-thirds covered in ice. I think we saw fifteen species of bird during the six days we were there, a tally that I could better in less than six minutes in my garden. But apart from that minor glitch it was an extraordinary adventure in an extraordinary country.

To me what is even more remarkable about Greenland is that nobody seemed too sure to what continent it belonged. Incredible as it is the size of the whole of western Europe. (technically it is part of the continent of North America…..I think). 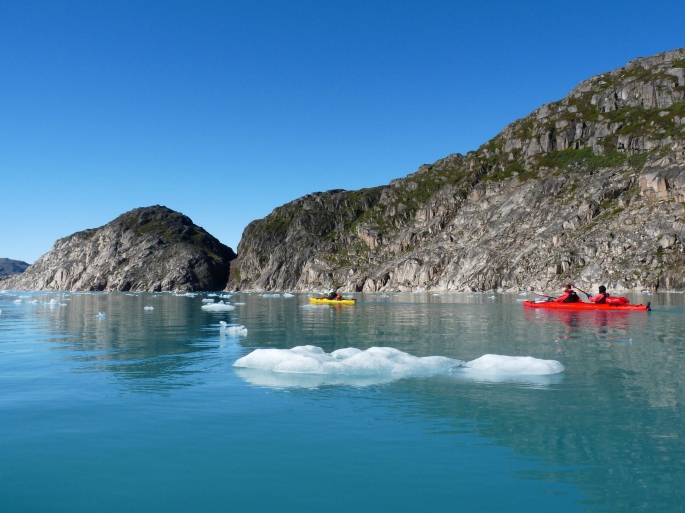